Freebooting on the Frontier [3]

The first entry in this series can be found here.

"The Three-Headed Horror," I think to myself, "Just how bad is that, exactly?"

To the inhabitants of Threshport, it's the worst thing around, but according to my players, it's known for snatching children, not attacking full-grown adults. So I decide that it's Solitary, Large, and Cautious, and then I refer to the "Monster Maker" sidebar in The Perilous Wilds—just a compressed rewrite of the monster-making rules in the core Dungeon World rules—to guide me: 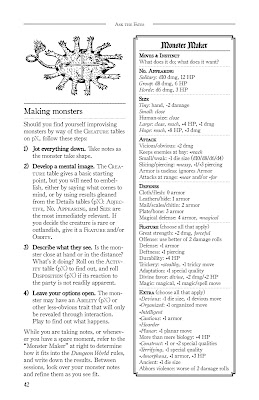 I quickly jot down the essentials, but I don't give it any moves, since with improvised monsters I like to just let moves emerge through play.

I tell them that some time in the mid-afternoon, still pushing through the jungle, they hear the beating of mighty wings behind them. "What do you do?"

Everyone describes taking cover except one player, who asks, "How much of a forest canopy is there?" and since I have no ready answer, I ask in return, "How much would you like there to be?"

I love this move because I can go to it whenever I find myself hesitating to answer a player's question about a situation. If I have a clear mental image, or I've already made a decision about the object of the question, I run with that; but if it's totally up in the air, I'll ask them to Get Lucky and riff on the result. In this case, the player rolled a 10+, so yes: plenty of tree cover, "You look behind and see the upper limbs of the tallest trees waving as something really big swoops over them, in your direction."

So everybody tries to hide. And I ask Rowe, the character with the lowest Dexterity, to Make a Saving Throw with Dexterity.

Make a Saving Throw
When you act or react in the face of danger, roll...

(Yeah, yeah, it's pretty much just Defy Danger, I know. Forgive a guy his nostalgia for nomenclature)

I only ask Rowe to make the roll because in this kind of situation—a bunch of characters doing the same thing and hoping for a positive result—I think it's most efficient and satisfying to have the responsibility fall to the least competent character. It might be different if people were describing ways in which they were helping one another, but in this case it's five green adventurers abjectly diving and hiding. Every person for themself.

Rowe rolls a 7, and I tell him that as the Horror sweeps across the treetops directly overhead, and everyone is showered in loose branches and leaves, there's a moment when the beating of its massive wings parts the canopy and one if its three great eyes stares right down at him. The three heads together let out a tripartite screech that makes the characters' blood run cold  (I try to imitate a sort of a Godzilla chorus), but the thing continues on its way. I've decided what the creature's going to do, but from their perspective it's not stopping, and soon the sound of its beating wings fades.

Everyone gets up and moves cautiously ahead, until the tree cover ends in an open expanse of tall grass, rolling down and away from them to the east. Selina and Cóldor break right, skirting the treeline, while Elorfindra, Rowe, and Ogethas decide to head left. A moment later, the Horror drops down from the sky into the open area, facing them. All three heads let out a deafening shriek, each twisting on a long neck to scan the jungle with a great golden eye. 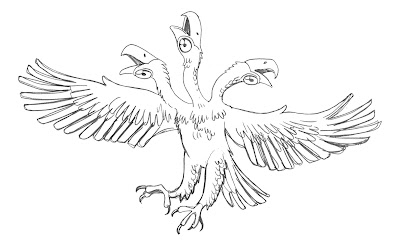 Once again, everyone takes cover, and once again I ask Rowe to Make a Saving Throw with DEX in order to avoid being seen. He gets another partial success, and I tell him that as he presses his sweaty, large body into a bed of ferns, a red snake about the length of his arm slides out of the foliage and onto his back. Ogethas, in cover behind a wide-boled tree nearby with bow in hand, puts two fingers on an arrow in her quiver.

"In a whisper I say, 'welcome, friend in nature, make yourself at home,' and put off as many good vibes as I can manage in my panicked state."

"Make a Saving Throw with Charisma."

He rolls a 12. The snake slips off his back and into his shoulder bag, and Ogethas shakes her head in a combination of consternation and disbelief. The Horror lets out another shriek in three-part disharmony. Everybody hold position, stock-still.

I had decided for myself that if they didn't do anything stupid at this point, the monster would take off and continue on its way, But then Elorfindra, thinking either that it would be good to draw the Horror's attention away from the rest of the group, or just trying to save her own ass, makes a break for it, running directly back into the jungle the way they had come. The Horror notices, all three eyes locking onto the movement, and launches itself heavily into the air to give chase above the treetops. Inexplicably, Cóldor gets up and runs after the elf Cleric.

I say inexplicably, because at the time I could see no logical reason why either of the elves would do what they did in this situation, but a moment later I realized they were both acting directly on the "Reckless" character trait. And boy does Cóldor follow through: he runs to the largest nearby tree and begins scaling it as fast as he can, with the intent of attacking the monster in hand-to-hand combat. Ogethas, Rowe, and Selina look on in disbelief, certain that he's going to die. Elorfindra peels back around in a wide circle toward the tree—not running away after all.

The Horror sees Cóldor climbing the tree and slows to a hover, beating its massive wings above the canopy and sending all manner of fruit, dead branches, and foliage showering to the ground. It rises and dips, eyeing him through the branches, looking for an opportunity to lunge. He describes his intent to get as high as he can and then jump onto the monster.

At that moment, Elorfindra arrives at the base of the tree, draws her shortbow, takes aim at one of the great eyes as it peers through a break in the branches, and lets fly.

* Mark off 1 ammo
* You have to move to get the shot, worsening your position
* Just winged ’em—roll damage twice and use the lower roll
* You attract unwanted attention

She rolls a 10, then 1d6 for damage and gets a 6. I don't subtract the Horror's Armor value because its eye was the target, and a large one at that. The arrow disappears into it and the thing recoils in deafening agony, pulling back from the treetops. I glance at the tags I had hurriedly assigned and note Cautious. I describe the Three-Headed Horror reeling away and flapping ponderously into the distance, its cries echoing through the jungle. I make a mental note that the creature will return one day.

Everyone regroups, and words are had with Cóldor regarding his stupidity. He ignores them and dismisses the monster as a coward. This would be the first of many occasions when Coldor's recklessness would invite danger, to often hilarious effect.