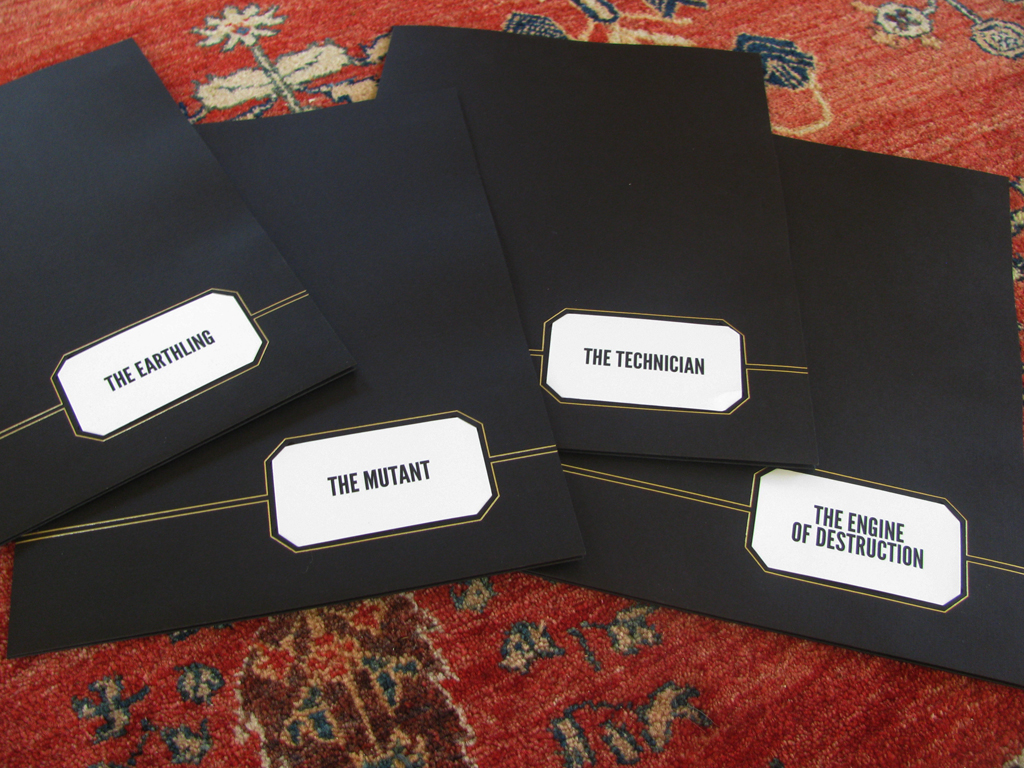 Once all four players were present, I handed them each a character folder. Each folder contained the playbook for one of the replacement classes in Adventures on a Dungeon Planet: the Earthling, who replaces the Paladin and is set up to play like John Carter, Warlord of Mars; the Technician, who replaces the Cleric and fills the role of the classic mad scientist; the Mutant, who replaces the Druid thanks to his transformative nature; and the Engine of Destruction, who replaces the Fighter and plays exactly like his name says. Within 20 minutes everyone had chosen stats, alignments, bonds, and whatever optional moves were available to them at the outset. Our party was Curry Cashews the Earthling, Dr. Morrow the Technician, Mylock the Mutant, and Gorebot 5000, the four-armed Engine of Destruction.

Adventures on Dungeon Planet is designed to accomodate a pulp sci-fi setting of your choice. I opted for the one loosely outlined in John Harper's Danger Patrol: in the far future (as imagined circa 1930), all of the planets in the solar system are habitable and home to indigenous races, except Earth, which has been reduced to an asteroid belt by some unnamed cataclysm. With that as a starting point, and following the Dungeon World directive of running an adventure with as little prep as possible in order to let the story unfold through the playing of the game, I sketched out a Front that was a little under two pages of 10-point type. The Reptilord Empire is poised to strike at the Free Planets, waiting for the signal from its Skinshifter Agents, who have infiltrated the major planetary governments, in order to sabotage defenses and sow dissent.

Once character creation was complete, I read the following intro (cribbed in part, again, from Danger Patrol):

In the Jeweled Courts of Saturn

The four members of the Danger Patrol, bound together by chains of adamant, stand before the Sapphire Throne of Saturn. The beautiful Princess Anu sits on the Throne for the first time, eyes ablaze with a strange blue light. Behind her, lurking in the shadows, the evil Duke Damadu mutters under his breath. His lips seem to mimic the words spoken by the Princess, who stands and shouts to the assembled throng.

“You have been found guilty of espionage against the Crown of Saturn! And the sentence... IS DEATH!”

The courtiers lining the majestic hall gasp in horror as the wall behind the Throne dissolves, opening the Palace to the rocky landscape outside. A tongue of rock extends away from the Palace out over the Great Pit, a void of dizzy breadth and impossible depth.

The silver-armored Saturnine Guard, a dozen strong, forces our heroes onto the promontory at spearpoint. The rings of Saturn curve across the sky directly overhead in an overwhelming arc. Electrical storms crackle and across the gray, rocky landscape that encircles the Pit. A hot wind suddenly gusts up from below, whipping clothes and hair about with abandon. Within moments, the Danger Patrol finds itself at the precipice, with nowhere to go but down.

“I’m sorry it’s come to this,” shouts the Captain of the Saturnine Guard over the howling wind, “but we are bound by blood oath to obey the Princess! May the God of the Sky bless your passage...”

A great roar, like that of a thousand starving beasts, rumbles up from below, causing the rock to shudder underfoot.

“And may the God of the Pit devour you swiftly!” 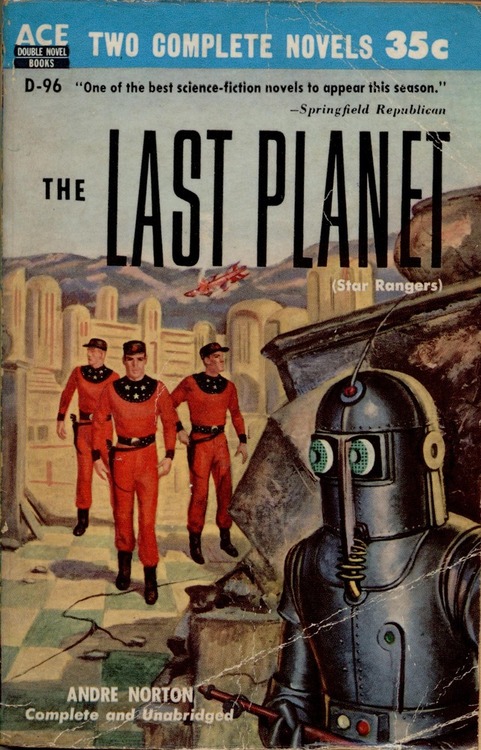 In *World games, there's no initiative or other way of formalizing turn order. Players can speak up and act whenever they want, and scenes unfold organically according to what happens as the result of character actions. After setting the stage I inform my players of this fact, and Gorebot 5000 steps up immediately with, "I break the adamant chains with my great strength."

The hulking machine-man makes his bend bars, lift gates roll, which, like all non-damage rolls in Dungeon World, is 2d6 plus the relevant stat's modifier (in this case, Strength). All such rolls use the same scale of results: on a 10 or higher, you succeed as desired; on a 7-9, you succeed with a cost; and on a 6 or lower, you fail, but "mark XP" (gain 1 experience point). I love two things about this approach to rolling: you only ask for a roll in a situation that really demands it (i.e., if something is not truly demanding or dramatic, you just do it without rolling); and the result spread never changes.

Gorebot rolls a 7, plus his STR modifier of +2 = 9, so he succeeds with a cost. Most "moves" (DW parlance for character actions governed by game mechanics) call for the GM and/or players to interpret a 7-9 result, but a 7-9 result for bend bars, lift gates specifically allows the player to choose 2 effects from the following list:

Gorebot chooses #1, because he wants to rip the chains off immediately, and #4, because he thinks he might need to make the chain whole again for some reason (?). He did not pick #2, so I take that as my cue to tell him that in his Herculean effort to break the adamant chains, he actually rips off one of his four arms at the shoulder joint.

Mylock the Mutant pipes up, saying that he's going to slip the end of his monkey tail into one of Curry Cashews' boots, grab the Earthling's concealed dagger (a detail created on the spot), and use it to pick the lock on Cashews' adamant cuffs. Mylock is acting on one of the bonds he established during character creation: "Curry Cashews has been a friend to me when others were prejudiced."

I rule this is a single defy danger move. Defy danger is a kind of catch-call for performing actions under threat, which uses a different one of the six stats depending on the action taken. In this case, it's Dexterity. Mylock gets an 6, +2 for his DEX modifier, = 8. The 7-9 result for defy danger reads, "you stumble, hesitate, or flinch: the GM will offer you a worse outcome, hard bargain, or ugly choice."

This is the first time I have to deal with one of the more challenging (but also more fun) aspects of GMing a *World game: the hard bargain or ugly choice. The GM comes up with options for the player relevant to the action at hand, and the player decides which option to take. So I tell Mylock, "you slip the dagger out of Cashews' boot, but as you start picking the lock, you feel the blade giving. You can either pry it open and break the dagger, or stop prying and leave the dagger intact."

Not the strongest hard bargain, but I'm just learning how this all works. Mylock wants to be free immediately, so he apologizes to Curry Cashews and pops off the adamant cuff, which falls to the ground along with the two pieces of the dagger. The Earthling is free!

So the focus naturally shifts to him. The Earthling's sole piece of starting gear, besides the clothes on his back, is a "magic shield." The Adventures on a Dungeon Planet rules do not define the properties of a magic shield, but the Earthling's player doesn't hesitate. "I hold up my free arm," he says, "and call my shield back to me."

Everyone's taken it as a given at this point that they had been relieved of their starting gear before the intro, and that it's being held somewhere in the Palace. Wherever Cashews' magic shield lies within, it thrums in response to his wish, and I ask for a defy danger roll using Wisdom ("mental fortitude") to call the shield. His total is 11: "A stained glass window on the second floor of the Palace shatters as the shield punches through it and hurtles over the heads of the Saturnine Guard, then slips back into its rightful place on your left arm."

"I bring the energized edge of the shield down with enough force to break the chains holding Mylock." That's defy danger using Strength, and he rolls less well: a 7. Instead of offering him a choice, I just go with "a worse outcome," and say, "Miraculously, the magical energy of the shield cuts through the adamant, but Mylock's weight was pulling against it, so when the chain breaks he lurches suddenly away and over the edge of the precipice. Mylock, what do you do?"

Tune in next time for another episode of Danger Patrol on a Dungeon Planet!